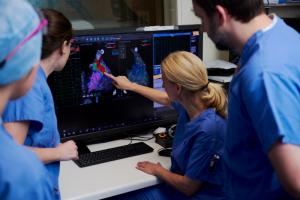 Arrhythmias or heart rhythm problems are experienced by more than two million people a year in the UK. At Royal Brompton & Harefield Hospitals Specialist Care, our specially-trained cardiologists can use electrophysiology procedures to determine the cause of a slow, fast or irregular heart rhythm.

During the procedure to ablate the arrhythmia, the consultant uses imaging devices to find the precise areas in the patient’s heart that are responsible for the faulty electrical impulses. The site is then treated to stop the faulty rhythm and allow the normal, regular rhythm to take over.

An effective way of visualising the position of the catheters is to use conventional x-ray imaging. However, exposure to x-rays can cumulate over a patient’s lifetime and is associated with an increased risk of developing cancer later in life. Unfortunately, medical imaging is recognised as being one of the contributors to this lifetime risk. Those at the highest risk are patients who are young or who need repeat procedures.

When possible, it is important to apply all measures to reduce the overall radiation exposure to a patient during an ablation procedure. This is known as the ‘as low as reasonably achievable’ or ALARA principle.

These 3D ‘roadmaps’ are used to show the detailed anatomy of an individual’s heart. The mapping systems need special catheters equipped with sensors to allow exact localisation of the catheter during the procedure.

Because of the 3D mapping, the total radiation time from x-rays can be substantially reduced. For a growing number of patients who need to undergo an ablation, the exposure to x-ray radiation can be zero or reduced to just a few seconds.

With this approach, the patient’s lifetime ‘radiation bill’ is not added to with potentially harmful radiation, therefore the cancer risk is not altered by the procedure.

Which arrhythmias can be treated

Various types of arrhythmia can now be treated using 3D mapping – without exposure to x-rays – including:

Young patients and female patients with childbearing potential are benefitting the most, whilst it is the only possible way to treat pregnant women with drug-refractory arrhythmia.

Some patients do need to undergo x-rays for their treatment, for example, those with implanted devices such as pacemakers, defibrillators (ICDs), and biventricular devices. Depending on the position of the valve, patients with a metallic heart valve also may also require navigation using x-rays.

As the ablation procedure is otherwise carried out in the same fashion, the success rates and are equally as good when using x-ray or 3D mapping systems for navigation. The recovery period is also the same, and patients are able to return to normal physical activity after 10 days.

At 36 years old, Jennifer* is a young arrhythmia patient.

For many years, she was experiencing a lack of energy, pounding in the chest and occasional tightness when anxious. She was prescribed medication to ease the symptoms, but gradually they became more intense. Eventually, this began to impact her work as a flight attendant, particularly during long haul flights

Jennifer was referred to Dr Sabine Ernst. Following a consultation, she underwent a catheter ablation using the structure 3D mapping approach. Because of her age and her occupation in the aviation industry, Dr Ernst was keen to keep the radiation exposure as low as possible.

Following the procedure, Jennifer was discharged the next day feeling well. She said: "I am no longer taking any medication and do not feel the hard pumping in my chest, so it feels a lot quiter than before! I was extremely impressed with how smooth everything ran and the care and professionalism shown by the medical team. 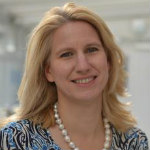