Raphael Foster has a severe heart malformation that limits his ability to exercise. He suffers from an extremely rare form of congenital heart disease called Ebstein’s Anomaly (EA) – a heart defect affecting the tricuspid valve.

This affects the efficient working of the heart, leading to increased pressure in the right atrium and, in some cases, enlargement of the heart and heart failure.

The surgery was very successful, allowing Raphael and his family to return home within just a few weeks.

Explaining the procedure, Dr Da Silva said: "The cone procedure involves folding up the extra tissues on the enlarged right side of the heart and surgically reshaping the malformed valve into a cone. The cone-shaped valve is then able to open and close effectively, with full coaptation. It is different to other valvuloplasty techniques, as the procedure involves anatomical repair."

Mr Ghez comments: "I was extremely pleased that Dr Da Silva was able to travel over to the UK to perform this operation. It presented an excellent opportunity for us to give Raphael the best possible chance of living a normal, healthy life, whilst being able to learn more about this innovative procedure."

Speaking of their son’s care, Mr and Mrs Foster comment: "We were very impressed by the level of care and support provided by Mr Ghez and his team at Royal Brompton Hospital."

"Because of the nature of our son's condition, we understood that Dr Da Silva was probably the only person who could have carried out the cone operation on our son. The effort he made to come to England and his level of skill and professionalism is something we are so grateful for… and the fact that Mr Ghez also assisted in the operation gave us so much confidence. It is difficult to articulate the debt of gratitude we owe both of these doctors."

"As for Raphi, he is now back and laughing again and has returned to school," they add. "It is relatively soon after the operation, so he still has some improvement to make, but the cardiologist appointments have been reduced from weekly to six weekly and they are very happy with his progress."

Later in the year, Mr Ghez flew over to Brazil to perform two more cone reconstructions with Dr Da Silva. By gaining valuable training and experience, Mr Ghez hopes to be able to perform and share this technique to help more children affected by this debilitating disease. 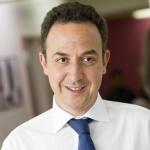