An expert team is key to diagnosing interstitial lung disease 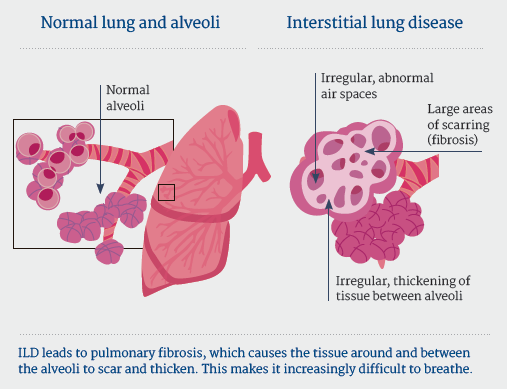 What is interstitial lung disease, or ILD?

The term ILD includes a broad group of lung disorders that can cause progressive and irreversible fibrosis of the lungs, leading to worsening breathlessness and other respiratory symptoms. ILD is most common in adults, where men and women are equally affected. Patients with advanced disease – especially if they are untreated, or if treatment has been delayed – may require supplemental oxygen or even a lung transplant.

The British Lung Foundation estimates there are over 150,000 people living with ILD in the UK. More specifically, the incidence of idiopathic pulmonary fibrosis, the most aggressive form of ILD, is thought to be increasing. This increase may be due to earlier diagnosis because of a higher clinical suspicion or the availability of improved diagnostic tools, but disease-related factors have not been excluded.

It is increasingly appreciated that idiopathic pulmonary fibrosis can run in families. Although it is a disease that is more common in older people, it can occasionally develop in those as young as 40 years of age if they carry a genetic predisposition. It is therefore important that individuals who develop persistent, unexplained breathlessness or cough and who have a family member affected by idiopathic pulmonary fibrosis should be assessed so that the condition can be excluded. 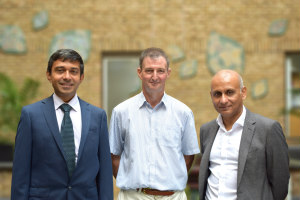 Examples of ILD include:

This is the most common form of fibrotic ILD. Its cause is unknown and it most frequently affects men over the age of 65 who have previously smoked. Many patients present late, often because of delayed diagnosis or misdiagnosis.

Lung inflammation and subsequent fibrosis caused by an abnormal response to inhalants including bird proteins, fungi/mould spores and certain chemicals.

Rheumatoid arthritis, systemic sclerosis (scleroderma) and systemic lupus erythematosus can all be associated with ILD.

A condition that involves the accumulation of inflammatory cells as granulomas in various organs, most commonly the lungs, joints and skin but also the heart, nervous system or liver, amongst others.

The most common signs of ILD include a dry, nonproductive cough and breathlessness. These nonspecific symptoms, combined with the fact that ILD includes a broad spectrum of diseases, makes diagnosis exceptionally difficult.

“So many of our patients spend two, three or even five years in the community misdiagnosed with asthma or chronic obstructive pulmonary disease. However, it is vitally important that patients are identified accurately as soon as possible. With early treatment tailored to each patient’s ILD, we have a better chance of preserving as much of their lung function as possible. This is important as lung scarring is irreversible and so the earlier it is treated, the better the outcomes,” explains Dr George.

“We are fortunate at Royal Brompton Hospital in that we have unique access to diagnostics not available anywhere else. This includes genetic tests for familial idiopathic pulmonary fibrosis and a technique called transbronchial lung cryobiopsy for ILD, which is a relatively new day-case biopsy procedure – it is ideal for patients who are not suitable for surgery.”

How is ILD treated?

Treatment depends on the type of ILD and new treatments are exclusively available for idiopathic pulmonary fibrosis at specialist centres such as Royal Brompton Hospital. These include Pirfenidone and Nintedanib, which have been shown in thousands of patients to slow down the rate of disease progression.

“We currently have 650 patients actively on these new treatments, and we’ve found them to be very safe and well tolerated. We initiate between 20 and 40 new patients on these medications each month and so are very experienced with their use. However, it is crucial to make a correct diagnosis. For example, if you treat idiopathic pulmonary fibrosis patients with immunosuppressants instead (how other forms of ILD are treated), large trials have shown the condition of these patients gets worse,” explains Dr George.

The Royal Brompton Hospital’s multidisciplinary ILD team is world-renowned and highly experienced in the diagnosis and treatment of ILD.

“As these conditions can be complicated to diagnose, adopting a highly specialised team-based approach ensures that patients are managed in the best possible way. For example, we have specialist radiologists and pathologists with many years of experience in ILD diagnosis specifically. Each week, the whole team comprising of ILD clinicians, radiologists and pathologists meet to discuss cases. This is an important way to pull in expertise to ensure the best outcome for patients,” explains Dr George.

Dr Felix Chua, consultant respiratory physician, adds: “Accepting second opinion requests and achieving correct diagnoses of a range of interstitial lung diseases in an expedient manner from national and international referrers is a core part of what we do. These conditions can be very complex, may be rare or even involve organs outside the chest”.

“Interpreting CT scans for the presence and type of ILD requires an experienced eye to spot the features which are indicative of the disease. Many scientific studies have shown that diagnostic confidence and accuracy is enhanced in experienced centres”, explains Professor Anand Devaraj, consultant thoracic radiologist, who works as part of the multi-disciplinary team. “We also help monitor each patient’s condition through imaging, to ensure treatments are working to control their disease and determine whether the ILD management strategy needs to be revised.”

Professor Andrew Nicholson, consultant histopathologist, also works closely with the clinical team. With over 400 publications to his name and a key adviser on global ILD classification and management guidelines, he regularly receives samples from clinicians and pathologists the world-over, to confirm an ILD diagnosis.

He explains: “Sometimes, the diagnosis is not clear from imaging or a patient might present in an unusual fashion – particularly if they are young. In this case, tissue samples from the lung may be required. Whereas some Histopathology departments in other countries might see one or two cases per year, we review up to 10-20 lung samples per week. Due to this, they might not be as familiar with the nuances of ILD pathology, so they trust us to support their diagnosis. We get over 100 ILD pathology referrals like this every year.”

“Should a patient require a lung biopsy, we are fortunate in having some of the best thoracic surgeons and highly skilled anaesthetists.

“Additionally, we work very closely with the lung transplant team based at Harefield Hospital which is amongst the most experienced in the country and have started a joint ILD-Transplant clinic meaning that patients who have advanced disease are discussed early for suitability of lung transplantation and are in very safe hands. We also have a very active and world renowned clinical trials unit and so patients are given the opportunity to enter trials of new therapies as they emerge.”

"One recent case I’ve treated was a 42-year-old woman who came to see me privately after being diagnosed with ILD. When I first saw her, she was very upset as she could hardly work due to her breathlessness.

Within a few days she had a CT scan, lung function tests and a bronchoscopy, with her results discussed at our multi-disciplinary team meeting. Through our team-based approach, we uncovered that she had hypersensitivity pneumonitis caused by an immune reaction to her beloved pet African grey parrot.

With this early, accurate diagnosis, specific treatment and after rehousing her parrot, she made a full recovery with no residual lung fibrosis. She was very pleased with this outcome as she was able to return to a normal life and a very active job – but was of course a little sad about losing her pet.”
–  Dr Peter George