The device is the size of an AA battery and sits in the right hand side of the chest, connecting to a patient’s heart by small tubes that pump blood around the rest of his or her body.
It is the smallest VAD available and is small enough to be implanted through a minimally-invasive procedure so it does not require opening the patient’s sternum. This means a quicker recovery time for the patient.
Harefield was the only UK trial centre and five patients received the device during the trial period.
Chris Schaffer was the first patient to have the implant post trial. He believes he has been given a “second chance” following the operation. He said: “I came round from the operation about five hours afterwards and was raring to go. Being able to walk up the stairs on my own the following week was momentous. I hadn’t been able to walk for four months, let alone climb the stairs. I feel better than I have for years – I feel like I’ve been given a second chance, given a new life.”
The renowned ventricular assist device (VAD) programme at Harefield Hospital, led by Mr André Simon, director of transplantation and circulatory support, has played a pivotal role in the development of new generations of these so-called ‘artificial hearts’ and pioneered recovery therapy.
Ventricular assist therapy has become clinical routine and many thousands of patients have been treated with a VAD worldwide.
Today, a significant number of patients receive a device instead of a heart transplant. Harefield Hospital has the UK’s largest VAD service. 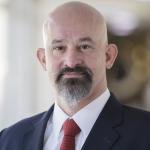