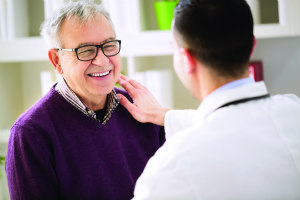 With more than a million over-65-year-olds thought to be affected by heart valve disease in the UK alone, experts at RB&HH have been leading the way in recent years to develop new lifesaving alternatives for patients who are at increased risk from conventional open heart surgery, or who might benefit from a minimally invasive approach.

The transcatheter valve service was established in 2007, which means it is now over 10 years since the first transcatheter aortic valve implantation (TAVI) at RB&HH. The service brings together a multi-disciplinary team, including surgeons, cardiologists, anaesthetists, imaging experts and specialist nurses to ensure patients of all ages have access to innovative treatments for the two most common heart valve conditions, aortic stenosis and mitral regurgitation, which between them account for well over 75 per cent of all patients with valve disease.

The programme is led by consultant interventional cardiologist Dr Simon Davies, and is unique in the UK in terms of volume of TAVI activity, the complexity of cases treated, for the range of catheter-based procedures used to treat the mitral valve, pulmonary valve, and tricuspid valve.

Dr Davies explains: “For most patients with heart valve disease, conventional surgery is still the gold standard treatment. However, for many patients this is not an option because of their advanced age, frailty, or other medical problems. The international expertise of the RB&HH team can be invaluable in ensuring that patients have access to the most suitable alternative procedure.”

These include MitraClip, mitral valve-in-valve and valve-in-ring implants with different devices, transcatheter mitral valve implantation with the TENDYNE system, and transventricular mitral neochordal implantation utilising both the NEOCHORD and HARPOON systems. The team has an international reputation in these fields.

Which patients benefit most?

Due to an ageing population and the ever increasing number of patients requiring heart valve repair or replacement later in life, the minimally-invasive procedures available at RB&HH are particularly beneficial to older patients, who often have co-morbidities and are considered to be at high-risk for conventional surgery.

Some of the techniques being used by RB&HH experts were pioneered here, with the very first patients in the country – or sometimes even the world – benefitting from new revolutionary procedures. The multi-disciplinary approach adopted by the transcatheter valve team has led to RB&HH experts pushing boundaries and routinely carrying out increasingly complex operations with excellent outcomes.

Patients are benefiting from greater choice than ever before and have access to world-class specialist treatments that are not widely available elsewhere. Whilst each patient is individually assessed to ensure the best treatment path and procedure, here we describe some of the novel techniques our team undertake.

The aortic valve controls the blood flowing out of the heart and around the body. Aortic stenosis is the most common and serious form of valve disease. With advancing age, the valve can become progressively stiff and narrow as a result of calcium deposits, making it more difficult for blood to leave the heart. As blood flow through the valve becomes significantly reduced, symptoms can include breathlessness, chest pain, fainting and palpitations.

RB&HH specialists run the largest programme in the UK for transcatheter aortic valve implantation (TAVI). The only effective long-term treatment for aortic stenosis is to replace the aortic valve, therefore, TAVI is a lifesaving non-surgical alternative for a large number of patients. During the procedure, which can be performed under general or local anaesthetic, a catheter is guided through an artery (usually via a small incision in the groin) to the patient’s heart using special scanning equipment. A device is then placed within the narrowed aortic valve to relieve the obstruction.

The RB&HH team has expertise with many of the different TAVI devices currently available and considerable experience in using TAVI to treat previously implanted surgical aortic valves that are showing signs of degeneration (known as valve-in-valve TAVI).

The mitral valve separates the upper left heart chamber from the lower left chamber and helps control blood flow through the heart.

Mitral regurgitation (MR) occurs when the valve becomes damaged and fails to close properly. This results in blood flowing backwards or leaking, through the valve when the heart contracts.

There are a number of conditions that can lead to mitral regurgitation, but most commonly it is the valve becoming weaker over the years from ‘wear and tear’ or persistent high blood pressure. Symptoms can include shortness of breath, tiredness, dizziness and chest pain.

In late 2014, a sixty-eight-year-old patient with mitral regurgitation became the first person in the world to have the 'Tendyne Transcatheter Mitral Valve' system, which was implanted at Royal Brompton Hospital.

The tissue valve replacement is placed into a patient’s beating heart without the use of cardiopulmonary bypass, commonly known as a heart-lung machine. It is implanted via a catheter through a small incision between the ribs. During the procedure, the novel device can be repositioned, removed or redeployed as necessary.

Mr Neil Moat, the RB&HH consultant cardiac surgeon who carried out the world’s first-in-man procedure, says: “To date, about 50 patients have been treated worldwide with encouraging early results. Our first patients are now over two years since their implants and are doing well with stable valve function.”

RB&HH is the most experienced centre in the UK for this minimally invasive procedure to treat mitral regurgitation, having undertaken more than 140 cases to date, more than double any other UK hospital. MitraClip is a relatively new ‘keyhole’ technique that offers a less invasive approach to conventional surgery.

A catheter is inserted through the top of the patient’s leg and via the femoral vein, and a small hole is made to enable the catheter to cross from the right to the left side of the heart. The MitraClip device is then steered into the left atrium and is able to literally ‘clip’ the leaking portions of the valve leaflets together.

In 2016, the first patient in the UK to benefit from a new cutting-edge technique to repair a leaking mitral valve underwent the procedure at Royal Brompton Hospital as part of a clinical trial. The innovative minimally-invasive procedure uses a piece of equipment known as the Harpoon device, which – like a cardiac catheter – enters the heart via a small chest incision until it reaches the collapsed part of the mitral valve. Once in place, the surgeon releases synthetic chords from the device which then attach to the valve. The tension on the chords is adjusted until the valve no longer leaks. The endings of the chords are then secured to the outside of the heart.

Gold standard treatment for each patient

For patients with MR, conventional surgery is still the gold standard treatment and again, surgical members of our TCV team have international reputations in mitral surgery, particularly mitral repair. For patients with complex mitral valve problems, the team will review each individual patient and advise as to which of the above procedures may be suitable. Our team can help ensure your patient is directed to the most suitable clinician for their condition.

The following consultants are lead clinicians of the transcatheter valve (TCV) programme. 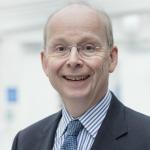 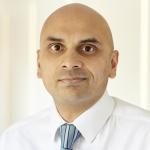 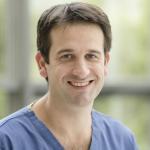