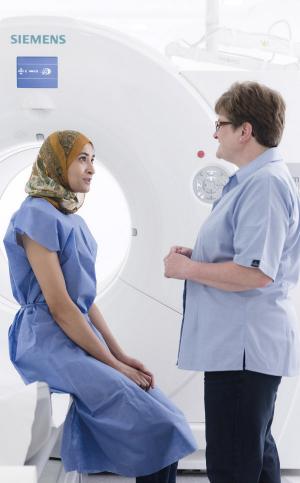 As one of the few PET-CT scanners in the country offering rubidium cardiac PET, and one of the first in London, our imaging team offers complex cardiac diagnostics to our private and international patients.

PET is based on the detection of two identical ‘coincident’ photons emitted after injection of a specifically selected radiopharmaceutical which concentrates in the area of interest within the body.

Myocardial perfusion imaging (MPI) utilising the radiopharmaceutical Rubidium-82 is a highly sensitive method for mapping myocardial blood flow; this involves an injection of 82Rb at rest and under pharmacological stress (hyperaemia).

82Rb is a PET tracer with a very short half-life of 75 seconds which allows the full procedure to be completed in less than an hour (an imaging time of about 30 min), as opposed to over 4 hours for routine SPECT imaging. This also contributes to a significant reduction in the radiation burden to patients, cutting the dose by up to a quarter.

Due to the diagnostic capability of the multislice CT scanner, patients can have a calcium score and high definition coronary angiography scan in the same appointment thereby offering increased diagnostic certainty with greatly improved sensitivity and specificity.

Which patients benefit most from 82Rb imaging?

Interpretation of SPECT and PET images is visual or semi-quantitative and based on relative uptake. Areas of the myocardium with the highest uptake are presumed to be supplied by unobstructed coronary arteries while those with decreased uptake during stress are assumed to be supplied by obstructed e.g. atherosclerotic arteries. Nonetheless, stenoses with luminal diameters around 50 per cent may be undetected by this visual interpretation alone.

Moreover, patients with subclinical coronary ischemia or microvascular diffuse disease may present with only mildly heterogeneous or even homogeneous myocardial uptake and similarly in the situation of three-vessel coronary disease, a reduction of myocardial uptake may be balanced in all coronary arteries, resulting in a homogeneous left ventricle myocardium at stress. Each of these pathological variants could potentially lead to false negative results.

Measurements of absolute myocardial blood flow (MBF) in millilitre per gram per minute and myocardial flow reserve (MFR), which is the maximum increase in blood flow above the normal resting volume, help identify subclinical coronary ischemia by characterising extent and severity in multi-vessel disease. Furthermore, it has been clinically observed that the measurement of hyperaemic MBF and MFR with PET-CT may predict, better than other methods, the occurrence of hard cardiac events.

Identification of viable myocardium is important when planning the strategy for revascularisation in patients with chronic ischaemic heart disease. Identifying and treating dysfunctional but vascularised, viable myocardium reduces patient morbidity and mortality.

18Flourine labelled fluorodeoxyglucose (FDG) behaves as an analogue of glucose when in the body and concentrates in chronically ischaemic dysfunctional but viable myocardium. In conjunction with 82Rb perfusion imaging, such pathology can be identified to plan the revascularisation strategy.

Confidence in the FDG identification method has only further grown following a large meta-analysis of observational studies looking at predicting the recovery of cardiac function following imaging and subsequent advised therapy. Results showed that FDG PET was the most sensitive method for identifying hibernating myocardium and hence considered the ‘gold standard’.

PET-CT can also be used to identify areas within the tissue which are affected by inflammatory and infectious processes; for example, it is very valuable in the diagnosis, management and monitoring treatment response in cardiac sarcoidosis patients.

Sarcoidosis involving the cardiac tissue leads to arrhythmias which can potentially be fatal but FDG imaging can be used to identify these areas of inflammatory cardiac involvement so that they can be treated accordingly.

FDG imaging is also proving useful in other difficult to diagnose cardiovascular inflammatory conditions such as giant cell vasculitis and Takayasu’s arteritis.

Similarly, following device implantation where patients display signs of infection, PET-CT imaging is helpful in pinpointing areas of device-related infections, e.g. with pacemakers, or in patients with pyrexia of unknown origin due to the concentration of FDG at the site of infection.

The key benefits of 82Rb PET 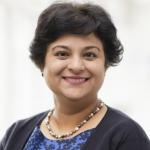