On a family trip to Italy, Ian Gratte’s first experienced symptoms - tightness in the chest and breathlessness. He first thought it was due to allergies. When he went to see his GP at home in the UK, he was told he probably had angina which suggested his heart muscle wasn’t getting enough oxygen-rich blood.

Blood work and an angiogram with a cardiologist followed. After being informed he would have to have a triple bypass, Mr Gratte was referred to Mr Shahzad Raja at Harefield Hospital.

When Mr Raja saw Mr Gratte, he decided a quadruple bypass would minimise future risks to his heart – since all four of his coronary arteries showed narrowing.

As much as for the patient, a quadruple bypass operation can be a tough prospect for a surgeon. The operation can take longer than its triple equivalent, with more conduits needed to bypass four narrow coronary arteries.

What’s more, performing four bypass grafts requires a significant length of the saphenous vein. If the surgeon harvests this by the conventional open technique, there can be a considerable chance of patient morbidity.

Then there’s the fact that substantial evidence suggests that a longer operation can equate with slower recovery. There can also be a lengthier hospital and intensive care stays.

The strategy translates into rapid postoperative recovery with fewer short-term complications. Since the cardiopulmonary bypass machine is not used and the long saphenous vein endoscopically harvested, there is less need for blood transfusion with less risk of impairing organ systems.

On top of this, long-term outcomes are excellent, including lack of angina and improved survival. There’s also less requirement for repeat revascularisation – secondary to the use of two internal mammary arteries instead of one, as used in conventional bypass operations.

A centre of excellence, Harefield Hospital is one of the few institutions world and nationwide to offer this state-of-the-art surgical myocardial revascularisation.

The initial angiogram was performed on a Tuesday. Mr Gratte was admitted to hospital for surgery on Sunday morning. After one night in intensive care, he was discharged from hospital on Thursday, five days later.

Mr Gratte can hardly believe that he feels himself again so quickly after a major operation. His greatest challenges have been getting used to sleeping on his back and avoiding heavy lifting for a few months.

In gratitude, Mr Gratte has since raised more than £3,500 in support of Harefield Hospital’s charity.

He credits Mr Raja’s work, in conjunction with Harefield Hospital’s support and cardiac rehab teams. He feels the level of care he received was instrumental in his quick recovery, would recommend the service and thanked the team’s kindness.

He also thanked Mr Raja for “making everything less stressful”.

He says: “Put your trust in your doctor – they know what they are doing”. 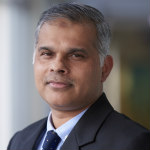