Mr Davis is an 81-year-old gentleman and has always led an active lifestyle, attending the gym at least two or three times a week over the last forty years. In his former years he was also a keen long-distance runner.

In July 2015, Mr Davis needed urgent medical attention after collapsing at a social event. His GP was concerned that his symptoms suggested a potential heart condition which would need further investigation. Consequently, Mr Davis was added to the NHS waiting list to see a specialist cardiologist.

Following his collapse, Mr Davis began to develop symptoms of breathlessness but put it down to old age. So he continued as normal while waiting for a referral appointment. However, in January 2016 he suffered a serious heart attack; it was at this point Mr Davis decided to contact his private health insurance company to arrange a specialist cardiologist review as soon as possible.

Mr Davis felt very re-assured by the advantages of having a mini-thoracotomy as it would be far less invasive than a sternotomy and the scaring would be much more discreet compared to other treatments.

Mr Bahrami arranged for a swift admission so that Mr Davis could undergo the mini-thoracotomy using the Edwards INTUITY Elite® aortic replacement valve.

In March 2016, Mr Davis was admitted to Harefield Hospital, where the dedicated specialist team provided his care throughout the duration of his two-week stay.

The operation was a success and although initially Mr Davis felt very uncomfortable after the surgery he is now on the road to a full recovery. Within three weeks, the scar was healing perfectly and is now just tender, without any signs of infection.

Mr Davis was delighted he was able to drive and go shopping so soon after his operation with reduced symptoms of breathlessness. Mr Davis is also looking forward to renewing his gym membership in the near future. 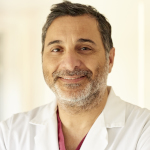