Mr David Busby, a father of two aged 66, describes his journey as a patient at Royal Brompton Hospital.

I first went to the doctor in 2009, after I had experienced great difficulty in swallowing food and drink. My doctor prescribed me with medication and when he did not see improvement, referred me to an ENT specialist for further tests.

I was then referred to my local hospital in Coventry with suspected cancer of the tongue, where they found a large tumour at the base of my tongue and secondary tumours in my neck, near my lymph glands.

The treatment that I received for my cancer was very intensive. I had 35 sessions of radiotherapy and two rounds of strong chemotherapy. But the chemotherapy didn’t work and after three months, I had surgery to remove the tumour from my throat. Well at last, I was able to get on with my life as best I could.

However, in May 2010, during a routine check-up, my oncologist found two secondary tumours in my lung. The consultant said that there was nothing he could do as surgical removal was too risky given their proximity to major veins. He provided me with a life expectancy of 6-12 months and referred me to a GP to organise my palliative care.

I was naturally shocked, particularly as I had not been feeling ill, but was determined to keep positive. I continued riding my mountain bike and concentrated on an active fitness regime.

In October, my friend spotted an article in the Daily Mail, describing the new lung laser system and the work that Mr George Ladas had undertaken. He had successfully treated a number of patients with similar tumours to me. I contacted Mr Ladas and booked an appointment to see him that month. 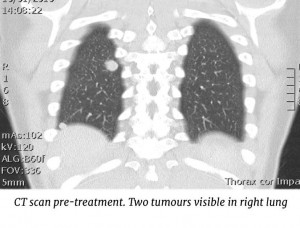 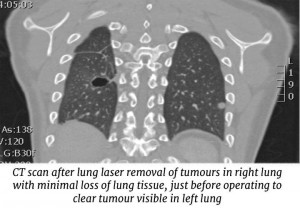 I had a range of tests, including MRI, CT scan and lung function, during which they detected a third tumour in my other lung. I was told that despite the tumours, my lungs were in very good condition, and there were no tumours elsewhere in my body. This, coupled with my high level of fitness, meant that I was a candidate for lung laser surgery.

I had two operations in November, one in each lung, to treat the tumours using the lung laser system. The operations were successful, with each hospital stay only lasting around five days.

Almost four years on, and I am completely free of cancer. I am very lucky that I found Mr Ladas – he’s literally my hero. For two years, I was reliant on a feeding tube, and now I am able to eat again.

I would, without a doubt, recommend Mr Ladas to other patients with secondary tumours. He is a highly skilled surgeon, eloquent but also very down to earth. The entire referral process was very well organised and the staff helpful and friendly. I now have whole new lease of life!

As of 2017, we no longer offer this service, but are able to offer video-assisted thoracoscopic PlasmaJet ablation with Professor Vladimir Anikin.