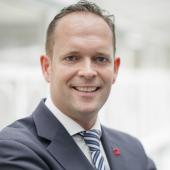 Dr Lyon studied at the University of Oxford, then trained as a junior doctor in cardiology in Oxford, in London (at Royal Brompton Hospital) and in Sydney, Australia.

He joined the cardiac medicine research group of Professor Sian Harding and Professor Philip Poole-Wilson, where he studied the influence of cardiac gene therapy upon ventricular arrhythmia generation. In 2005, he was awarded an MRC Clinical Research Training Fellowship.

Shortly later he completed his PhD in 2008, and spent his first postdoctoral year studying the spatiotemporal patterns of mitochondrial function in the lab of Fadi Akar and Roger Hajjar at Mount Sinai School of Medicine, New York.

In 2008, he was appointed a Walport Clinical Lecturer in Cardiology at Imperial College London, and completed his cardiology training at St Mary’s Hospital and Royal Brompton Hospital.

In 2012, Dr Lyon was appointed a senior lecturer and consultant cardiologist at Royal Brompton Hospital.

Dr Lyon has received a number of academic awards throughout his career, including the:

He runs a specialist clinic for patients with Takotsubo syndrome focusing on risk prediction and management of refractory symptoms.

He sees patients with a range of clinical problems including:

Dr Alexander Lyon is a co-investigator at the BHF Centre for Cardiovascular Regenerative Medicine at Imperial College London. In addition, he is the lead for the heart failure research theme of the National Institute of Health Research (NIHR) cardiovascular biomedical research unit (cBRU) at Royal Brompton Hospital.

He is coordinating both a national and European strategy to advance knowledge and improve care for individuals with Takotsubo syndrome.

He is a senior lecturer at Imperial College London, where he supervises PhD students.