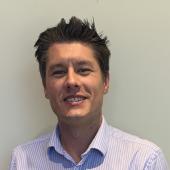 Dr Anthony Barron studied medicine at St. Mary's Hospital, Imperial College London, graduating in 2003. He took up junior doctor posts in London and Leicester before becoming a cardiology registrar in 2007.

He rotated amongst North-West London Hospitals until he started his PHD in 2010 and completed it in 2013.

After this, Dr Barron became a registrar in at Harefield, initially in transplant cardiology, then in imaging before obtaining a CCT in cardiology in 2016, sub-specialising in echocardiography and heart failure.

Dr Barron became a locum consultant at Harefield in 2016 and then a substantive consultant in 2019.

This includes medication, imaging of the heart, and also treating iron-deficiency with intravenous iron when caused by heart failure.

He has a specialist interest in valve disease and how they impact on the heart. Furthermore, he performs all echocardiographic studies including transthoracic echocardiogram (TTE), transoesophageal echocardiogram (TOE), stress and contrast, as well as nuclear cardiology, SPECT myocardial perfusion imaging.

He also treats and investigates the majority of cardiac conditions.

Dr Anthony Barron's PhD was based on the value of Cardiopulmonary Exercise Testing in patients with heart failure and he has had multiple parts of his research study published.

More recently it's research interests are in valvular disease and how it affects the heart, and on the correct role of imaging.

He is the co-PI on a research trial named Ironman looking at IV iron in heart failure.

Dr Anthony Barron is the Royal College Tutor for Medicine at Harefield Hospital and is the lead supervisor and educator for the SHO grade and the new Physician Associates.

Dr Anthony Barron has been involved in publications including: