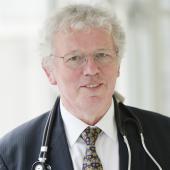 He qualified at St Mary's Hospital Medical School (now part of Imperial College London). After general medical training, he trained in cardiology at Harefield Hospital and the National Heart Hospital.

Between 1982 and 1987, Dr Ilsley was based in New Zealand as a consultant and senior lecturer at Dunedin Hospital, University of Otago.

He returned to Harefield Hospital in 1987. Since then, he has held honorary contracts at:

Dr Charles Ilsley has over 30 years' experience as a consultant cardiologist with wide experience in treating patients with:

He is a lead interventional cardiologist with vast experience of many interventional techniques, including intravascular ultrasound, pressure wire, laser angioplasty and rotablation.

He specialises in the closure of patent foramen ovale (PFO) and atrial septal defect (ASD), which are holes in the heart that haven't closed the way they should after birth.

Dr Ilsley is the initiator and head of the Harefield Hospital primary angioplasty service, which provides immediate response and treatment to patients with heart attacks.

Dr Charles Ilsley is a regular lecturer and moderator at international conferences. He enjoys postgraduate teaching and has given lectures worldwide in various countries including the United States, France, Dubai, Sudan, Bulgaria and India.

He chairs a primary angioplasty meeting at Harefield Hospital every year.