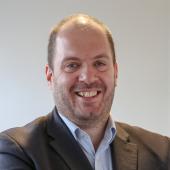 Dr David Gareth Jones is a consultant cardiologist who treats private and NHS patients at Royal Brompton and Harefield hospitals, and is the cath lab (catheterisation laboratory) director at Harefield Hospital.

He read medicine at St Mary’s Hospital Medical School (now part of Imperial College London) and won prizes in anatomy and histology. He was awarded a BSc scholarship and subsequently obtained first class honours in the field of cardiovascular medicine in 1997.

After he graduated with his degree in medicine (MBBS) in 2000, Dr Jones trained in general internal medicine in London and Plymouth.

He then trained in clinical cardiology, cardiac electrophysiology and cardiac devices at Greenlane in Auckland, New Zealand; and in London at Charing Cross, Hammersmith, Royal Brompton and Harefield hospitals.

His doctoral research (MD awarded 2013) was in the field of interventional electrophysiology in advanced heart disease. In particular he looked at the role of ablation therapy in managing patients with atrial fibrillation and heart failure.

Dr Jones's interest in rhythm extends beyond medicine - he is a keen violinist and has played with the European Doctors Orchestra.

Dr David Gareth Jones is a consultant cardiologist specialising in:

He has extensive experience in medical and interventional management, including advanced mapping and ablation therapy, for all atrial and ventricular arrhythmias.

He has a specific interest in patients with arrhythmias and advanced heart failure, including arrhythmia management and catheter ablation in patients who have had a heart or lung transplant.

His clinical research interests include arrhythmias in patients with advanced heart disease, including heart failure and post-transplantation. His MD(res) doctoral thesis, awarded in 2013, examined the role of catheter ablation to treat persistent atrial fibrillation in patients with heart failure.

He is the clinical lead for the catheter laboratory emergencies training programme, using the CRRISiS® (Clinical Risk Reduction in Simulated Settings) model developed with Harefield Hospital’s STaR centre in order to improve patient safety and quality of care.

He is also the regional lead for EP (electrophysiology) training at the Royal Society of Medicine.

Dr David Gareth Jones has published and presented widely in the fields of cardiac electrophysiology and devices, including in the sub-specialist area of congenital heart disease and cardiac transplantation. He introduced and teaches ultrasound guidance for pacemaker procedures at the Trust, and together with colleagues has introduced high-density substrate mapping to facilitate procedures to treat atrial fibrillation and ventricular tachycardia.