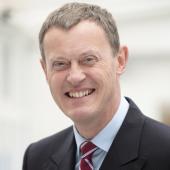 Professor Dudley Pennell is a professor of cardiology who images private and NHS patients at Royal Brompton Hospital.

In 2014, he was elected a Fellow of The Academy of Medical Sciences (FMedSci).

Professor Dudley Pennell is a specialist in cardiology, nuclear medicine and radiology.

His areas of expertise include:

Professor Pennell has led an international project introducing CMR techniques across the world. This T2* technique aims to increase life expectancy and quality of life for patients with thalassemia. Professor Pennell's new techniques for thalassemia patients have reduced the mortality rate by 80 per cent with his novel iron scanning technique being adopted in over 50 countries.

He is the Director of the British Heart Foundation Centre for Advanced Magnetic Resonance In Cardiology (CAMRIC) and is a National Institute for Health Research (NIHR) Emeritus Senior Investigator.

Professor Dudley Pennell has published more than 600 papers and books on his specialist subjects, including CMR of cardiomyopathy and the early diagnosis of myocardial iron overload.

In 2010, the BBC reported on Professor Pennell mapping the genes of BBC medical correspondent, Fergus Walsh.