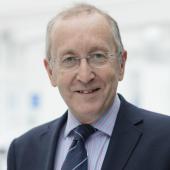 Professor Duncan Macrae is a consultant in paediatric intensive care at Royal Brompton and Harefield hospitals, where he treats both private and NHS patients.

Professor Macrae studied medicine in Scotland. Following that, he continued with postgraduate training in anaesthesia and paediatric intensive care in other parts of the UK and at the Royal Children’s Hospital in Melbourne, Australia.

For ten years, he worked as a consultant paediatric intensivist at Great Ormond Street Hospital for Children, London.

Alongside his role as a consultant in paediatric intensive care at Royal Brompton and Harefield hospitals, Professor Duncan Macrae is also clinical lead for paediatric collaboration with Chelsea and Westminster Hospital.

Professor Duncan Macrae actively pursues clinical research, and has been involved in many important clinical trials on treatments including:

He has researched tight glycaemic control in sick children.

Professor Macrae is interested in discovering the latest ideas from his travels, and implementing different approaches and ways of working as a result. For example, following a visit to the USA, he recently improved processes around risk management in intensive care, to further improve infection control.

Professor Duncan Macrae has published over 100 scientific papers and book chapters. He has extensive experience in reviewing and editing for leading medical journals.

He is the paediatric editor for the European journal Intensive Care Medicine and an associate editor of Pediatric Critical Care Medicine, based in the United States.

Professor Duncan Macrae speaks in the UK and internationally at specialist meetings and courses, congresses and lectures, such as the World Congress of Paediatric Cardiology & Cardiac Surgery.

He plays an active role in international organisations and is on the scientific committee of the World Congress on Paediatric Critical Care.