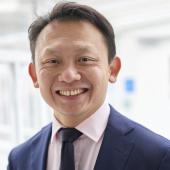 Dr Felix Chua is a consultant in respiratory medicine at the Royal Brompton Hospital, where he treats both NHS and private patients. He is an honorary senior lecturer in the National Heart and Lung Institute, Imperial College London.

Dr Chua graduated in 1995 from the University of London with First Class honours in an intercalated BSc in Immunopathology, the Robert Dick Finals Prize in Medicine and Surgery, a University distinction in General Pathology and the Helen Webb Prize in Diseases of Children.. He completed his general professional training on the Hammersmith Hospital and University College Hospital rotations and attained Membership of the Royal College of Physicians (London) diploma in 1998. This was followed by the award of a Wellcome Research Training Fellowship in 2000 to complete a PhD. His research involved the investigation of mechanisms underpinning the development of pulmonary fibrosis or lung scarring.

He subsequently completed higher specialist training in Respiratory Medicine in 2007. He was appointed to a consultant post at St George’s Hospital, London later that year. There, he established an interstitial lung disease (ILD) service including a combined ILD-rheumatology clinic and led the tuberculosis (TB) chest service. He assumed the Respiratory Medicine clinical lead post from 2011 to 2014.

Since joining the Royal Brompton Hospital in September 2014, Dr Chua has continued to run a busy NHS ILD practice and fulfil roles in postgraduate ILD training, clinical advisory work and chairing a monthly multidisciplinary discussion panel with physicians in Southeast Asia. He provides an Adult ILD link to the Paediatric Respiratory department at the Royal Brompton Hospital and to colleagues at the Royal Marsden Hospital. He was appointed as the Clinical Lead in Rare Diseases for the Southeast England Genomics Laboratory Hub in 2022.

Dr Felix Chua is actively involved in interstitial lung disease (ILD) research. During the pandemic, he contributed to the Royal Brompton Hospital COVID-19 management guidelines, helped to develop a clinical risk prediction score (SOARS) for persons with severe COVID-19 and evaluated changes in lung function during the early convalescence period.

Dr Felix Chua has written research and clinical papers, and contributed to textbooks in his areas of interest. A list of published papers can be found on Pubmed (https://pubmed.ncbi.nlm.nih.gov/).

Dr Chua delivers lectures on his areas of expertise to specialist doctors, trainees and medical students as well as other health professionals. He participates in inter-hospital case discussions and contributes to specialist respiratory meetings. He is a clinical supervisor at the Royal Brompton Hospital.