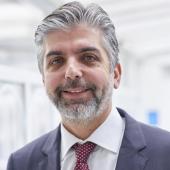 He qualified in medicine at the University of Hamburg, Germany, in 1992. Between 1999 and 2006, he trained on the West London rotation in cardiothoracic surgery before spending a year as a fellow in heart and lung transplantation at Harefield Hospital.

He then spent seven years working at University Hospitals Bristol NHS Foundation Trust as a consultant cardiac surgeon. During his time at Bristol, he was one of the busiest cardiac surgeons in the UK, performing more than 230 cardiac surgery operations each year.

He joined Royal Brompton Hospital in February 2014 as an aortic surgeon sub-specialising in areas such as complex problems of the aortic valve, aortic root, ascending aorta and arch. He also has significant experience in treating endocarditis and operating on patients who have had previous cardiac surgery.

Mr George Asimakopoulos has expertise in a range of surgical cardiac procedures, including:

Mr George Asimakopoulos is an educational supervisor for trainee doctors in adult cardiac surgery and regularly acts as a supervisor for medical students. He sits on selection and interview panels for the national selection of surgical trainees.