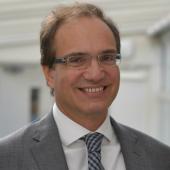 Mr Guido Michielon is the lead congenital surgeon at Royal Brompton Hospital, where he treats private and NHS patients. Mr Michielon is a recognised specialist for congenital heart surgery in the international scientific community. He is enrolled in the GMC Specialist Registry for Cardiothoracic Surgery.

In 2001, he took on the position of attending paediatric cardiac surgeon at Bambino Gesù Children’s Hospital in Rome, Italy, where he was granted the title of “top specialist” in aortic root and paediatric valve repair.

Between 2012 and 2015 he was appointed as a paediatric cardiothoracic surgeon at University Medical Centre Groningen in the Netherlands.

Mr Michielon joined Royal Brompton and Harefield Hospitals in 2015 as a consultant in paediatric cardiac surgery with special interest in neonatal surgery. He is currently the Clinical Lead for congenital heart surgery at the Royal Brompton Hospital.

Mr Michielon is an experienced cardiac surgeon and has performed over 3,000 open heart procedures in congenital and paediatric cardiac surgery. He can perform the whole spectrum of congenital cardiac procedures with a special focus on neonatal surgery, including:

Mr Michielon has special expertise in the three-stage Norwood procedure heart surgery for hypoplastic left heart syndrome, having been trained as Chief Resident by Professor Norwood himself.  This includes:

In 2010, he was part of the surgical team that implanted the first axial flow pump – the Jarvick 2000 – in a paediatric patient with heart failure.

Mr Michielon’s main interests focus on single ventricle palliation and the Fontan procedures. He has coordinated and published multi-institutional European studies on behalf of the European Congenital Heart Surgeons Association (ECHSA) on this subject. He recently published an important paper on interstage management after the Norwood stage one operation, based on the clinical experience he coordinated at Brompton Hospital during the last 5 years.

Mr Michielon has published over 50 papers as first author in some of the most valuable journals, including: