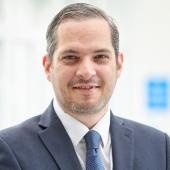 Mr J. Andreas Hoschtitzky is a consultant paediatric and adult cardiac surgeon at Royal Brompton Hospital, where he treats private and NHS patients.

He studied medicine at Leiden University in the Netherlands, graduating in 1994. He then did his postgraduate training in cardiac surgery in London, Bristol and Manchester with congenital cardiac fellowships in London at Great Ormond Street Hospital and Evelina London Children's Hospital.

From 2010-17, Mr Hoschtitzky was a consultant adult congenital cardiac surgeon at Central Manchester University Hospitals & Manchester Children's Foundation Trust. He was the clinical lead at the northwest regional adult congenital heart disease (ACHD) service in Manchester and served as educational and clinical supervisor. While in that role, he set up the regional extended septal myectomy programme for hypertrophic cardiomyopathy, and was one of only a few surgeons in Europe performing valve repairs of all four heart valves including Ebstein's anomaly.

Mr J. Andreas Hoschtitzky is a paediatric and adult cardiac surgeon, who works primarily as a cardiothoracic surgeon for the congenital heart disease team at Royal Brompton Hospital.

"Royal Brompton's congenital heart disease unit is one of the biggest and best in the UK: around 1,300 procedures are conducted here each year and the unit consistently has among the best patient outcomes in the history. People born with CHD are living longer than ever before and, as a result, demand for these services is increasing.

Royal Brompton is also recognised as the most influential research unit in the world for adult CHD. It is an internationally-respected team."

Mr J. Andreas Hoschtitzky has many areas of interest within cardiac surgery, such as: