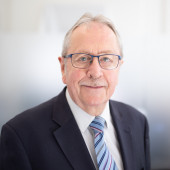 Dr John Stevenson is a consultant metabolic physician, based at Royal Brompton Hospital, who treats private and NHS patients.

In 1972, Dr John Stevenson qualified in medicine at King's College Hospital Medical School (now part of King's College London), then completed his training in general medicine in London and Southampton.

Following that, he completed specialist training in endocrinology and metabolism at the Royal Postgraduate Medical School at Hammersmith Hospital (now part of Imperial College London). He went on to extend his research and expertise into the effects of sex hormone deficiency and replacement both on the skeleton and on the cardiovascular system.

He also works collaboratively with educational institutions on projects, such as:

Dr John Stevenson is a reader in metabolic medicine at the National Heart and Lung Institute, Imperial College London. He has spoken at or chaired many international conferences across the world.

Dr Stevenson has authored many books and papers on his specialisms, which have received acclaim from his peers in the community.

He works on a number of journals, including:

He is also on the international scientific committee of the Colombian Journal of Menopause.