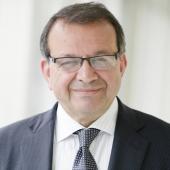 Dr Mahmoud Barbir is a consultant cardiologist at Harefield Hospital, where he treats both private and NHS patients.

He graduated in 1980 from the Royal College of Surgeons in Ireland. He did his initial training in general medicine and cardiology in Dublin, at St James's Hospital and Richmond Hospital.

Dr Mahmoud Barbir is a clinical cardiologist with a special interest in:

He is the lead physician in familial hypercholesterolaemia (FH) in adults and children, genetic screening and lipoprotein apheresis.

He is also involved in research on lipid-lowering therapies, including lipoprotein apheresis (LDL apheresis), refractory angina and dyslipidaemia in transplant recipients.

Some of his research projects include:

Dr Mahmoud Barbir is the lead supervisor for a PhD student as well as teaching master's students in cardiology at Imperial College London. He is also involved in teaching students from UCL.

He welcomes overseas students who are willing to learn and expand their knowledge in the UK. He has taught many international students who had honorary clinical attachments at the Trust.

In 2012, Dr Mahmoud Barbir presented at the first international conference on FH in children and adolescents in Athens, Greece. He presented on the treatments available to patients including lipoprotein apheresis for those who do not respond to medication. The Trust is the largest of only eight UK centres that can offer this treatment.

In 2013, Dr Barbir also presented at the sixth EU Round Table on FH in Berlin. He was the organiser and co-chairman of the Royal Society of Medicine Preventative Cardiology training day for SpRs 2013.

Dr Mahmoud Barbir has published more than 40 original manuscripts in medical journals, which include The Lancet, Circulation and the International Journal of Cardiology.

He has also contributed to many reviews and textbook chapters which include the following:

He is also a regular reviewer for the International Journal of Cardiology and other transplant journals.