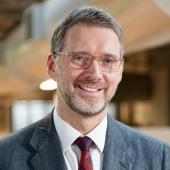 Professor Martin Cowie is a consultant cardiologist at Royal Brompton Hospital, where he treats both private and NHS patients.

He is a consultant cardiologist at the Royal Brompton Hospital and professor of cardiology at the National Heart and Lung Institute, Imperial College London.

Professor Martin Cowie specialises in adult cardiology, with a particular interest in heart failure and complex cardiac disease, often being asked to give second opinions on relevant treatment options.

Many of his patients come to him for advice on appropriate drug therapy and the need for interventions such as pacemakers, defibrillators or surgery.

Professor Martin Cowie has interest in the research of:

Digital health is a particular area of interest for Professor Cowie – using technology to support more effective and efficient delivery of care including apps and wearables. He leads the European Society of Cardiology’s digital health workstream, representing over 30,000 cardiologists across more than 50 countries.

Having developed a remote monitoring service at Royal Brompton Hospital, and testing many new technologies in clinical trials, Professor Cowie says: "It is exciting to see research move into practice ever more quickly."

To find out more about Professor Cowie's research:

He has also contributed to a number of book chapters and textbooks, and his work has been cited in the scientific literature more than 70,000 times.

He has been involved in research studies that have been published in journals including The New England Journal of Medicine, The Lancet, The British Medical Journal and the European Heart Journal.

Professor Martin Cowie has worked extensively with the National Institute for Health and Care Excellence (NICE) on its work in atrial fibrillation and heart failure. He was a non-executive director for NICE from 2016 until 2020.

In addition, he helped to develop clinical guidelines and quality standards for the NHS and has also worked with medicines regulators in the UK, EU and USA.

He helped set up and chaired the British Society for Heart Failure, and was a board member of the Heart Failure Association of the European Society of Cardiology. He has been involved in the global Optimize Heart Failure Care programme, which has seen him lecture across the world.

He is closely involved with two patient charities – the Atrial Fibrillation Association and Pumping Marvellous (the UK's heart failure charity).

In 2019, Professor Cowie was awarded the John McKenzie medal of service to British cardiology. He has also given a TEDx talk and spoken at various public events including Wired Health.

Research @ RBHH
RB&HH leads the way with innovative procedures and treatments for heart and lung disease. Here is the latestresearch from our team of expert consultants. European Society of Cardiology highlights pioneering research and patient care…
Revolutionising the care of heart failure
Royal Brompton & Harefield hospitals have a long history of innovation in remote monitoring of heart failure with skilled multi-disciplinary clinical staff and several research studies in this area. An implanted device is now being…
Consultants share expertise at European Society of Cardiology Congress
A large number of consultants from Royal Brompton and Harefield hospitals attended the European Society of Cardiology Congress in Barcelona, Spain. The event, which took place from Saturday 26 August until Wednesday 30 August 2017, is the…
Heart patients to have more implantable devices: Professor Martin Cowie BBC interview
Professor Martin Cowie was interviewed live on BBC Breakfast about new NICE guidance published on 26 June 2014 which mean more people will be eligible for an implantable cardioverter defibrillator (ICD) and/or cardiac resynchronisation…
Contact us