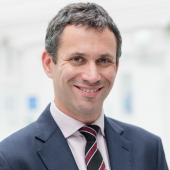 Professor Michael Loebinger is a consultant respiratory physician who treats private and NHS patients at Royal Brompton and Harefield hospitals.  He leads the respiratory infection service.

He studied at the University of Cambridge where he obtained a first class degree in Medical Sciences. He then moved to the University of Oxford where he completed his clinical training. Following that, he trained in respiratory medicine in London, at a number of hospitals including St Thomas’, Hammersmith, Charing Cross, St Mary’s, and Royal Brompton hospitals.

Professor Michael Loebinger is a respiratory consultant and clinical lead for respiratory infections. These include patients with:

In 2006, Professor Michael Loebinger was awarded a Clinical Research Training Fellowship from the Medical Research Council for research into the use of adult stem cells in lung disease. This research was performed at UCL and led to a PhD, multiple publications and awards and significant media interest.

His current research aims focus on chronic lung infections.  He is currently researching host susceptibility to these infections, in addition to the development of biomarkers and clinical endpoints to assist in their management. He has helped set up national and European research networks, with funding to produce clinical bronchiectasis databases and is the recipient of several prestigious research grants. He also collaborates with industry and is the principal investigator of multicentre international clinical trials.

Seven new professors at RB&HH Specialist Care
Royal Brompton & Harefield Hospitals Specialist Care would like to congratulate seven of our consultants who have been promoted from doctor to professor, by Imperial College London. Our consultants provide the highest standard of care…
TB screenings for patients requiring immunosuppressant drugs
Immunosuppressant drugs can increase the risk of latent tuberculosis being reactivated in the body, so Royal Brompton and Harefield hospitals are checking patients who receive them. Traditionally used to prevent the body from rejecting a…
Contact us