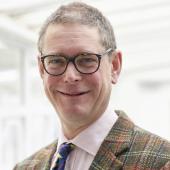 Professor Michael (Mike) Polkey is a consultant respiratory physician at Royal Brompton Hospital, where he treats private and NHS patients.

Alongside his clinical work, he is an academic and has the role of professor of respiratory medicine at Imperial College London.

As part of his private practice, he has visited the Gulf states extensively to both provide second opinions and act as a visiting professor in Qatar and Kuwait. Notably, on one occasion he appeared on a popular local TV show, Good Morning Kuwait!

Professor Michael Polkey specialises in treating a number of conditions:

In particular, he is an expert in:

Professor Michael Polkey is deputy director of the respiratory biomedical research unit at Royal Brompton Hospital, which is funded by the National Institute for Health Research (NIHR).

He has experience in acquiring and directing multi-centre research grants.

His research interests particularly focus around COPD, including:

"New treatments for COPD are likely to give benefit in ways other than by expanding the airways. To measure the effects of these treatments we need new instruments like the one we are developing."

Professor Polkey also collaborates internationally. He has a close working relationship with the Guangzhou Institute of Respiratory Disease, China, and has taken part in joint study visits and research projects. He has collaborated with Professor Luo from the Ministry on Physiological Studies looking at what happens to breathing muscles during sleep. With Professor Luo, he is a recipient of a grant award from the Chinese Ministry of Health.

He is associate editor of two journals, the European Respiratory Journal and Clinical Science. He sits on the editorial board of Skeletal Muscle and the COPD Journal. He reviews for all major respiratory journals and UK grant awarding bodies.

As part of his role as a professor of respiratory medicine at Imperial College London, Professor Michael Polkey supervises and examines PhD students.

Professor Polkey and his team train a number of overseas students at Royal Brompton Hospital, including junior doctors from as far afield as Greece and Siberia.

He is in demand globally as a speaker and has spoken at the American Thoracic Society, the European Respiratory Society and at the Asian Pacific Congress of Respirology. He has been visiting Professor in Lexington, Kentucky, USA and in Doha, Qatar.

RB&HH staff share expertise on visit to China
Professor Michael Polkey, consultant physician, and Bhavin Mehta, physiotherapist, have travelled to China to assist in setting up a new study to compare pulmonary rehabilitation with Tai Chi in helping to improve the quality of life for…
Call for lung cancer screening in UK to save lives
Professor recommends lung cancer screening for older smokers. Following the release of US data, Professor John Field from the University of Liverpool suggests that planning should start immediately for a new lung cancer screening service…
Respiratory weaning from mechanical ventilation: Leading the way for independent breathing
Professor Michael Polkey, consultant respiratory physician, and Dr Cordingley, consultant in intensive care medicine, discuss the pitfalls of mechanical ventilation and why a respiratory weaning service may be needed. Q. What is…
Royal Brompton opens new Sleep Centre
Opened by Sir Mervyn King, Governor of the Bank of England, the Royal Brompton Centre for Sleep offers a range of diagnostic and treatment services to individuals with sleep problems. From snoring to sexsonmia, sleep apnoea to narcolepsy…
Contact us