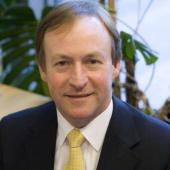 Professor Peter Collins is a consultant cardiologist at Royal Brompton Hospital, where he treats both private and NHS patients.

He studied at Caius College, University of Cambridge and St Thomas' Hospital Medical School (now part of King's College London), then trained as a junior doctor in London.

Professor Collins studied for a research degree at the University Hospital of Wales, Cardiff. He received his MD degree from the University of Cambridge, where he won the university’s Sir Walter Langdon-Brown prize for his thesis.

In 1989, he joined Royal Brompton Hospital as a consultant cardiologist. In 2001, he was appointed a professor of clinical cardiology at Imperial College London.

Professor Collins has clinical expertise in:

Professor Collins strongly promotes the prevention of coronary heart disease through optimal management of risk factors. He has a special interest in heart disease prevention and management in women and established the women's heart clinic at Royal Brompton Hospital with Dr John Stevenson – one of the first of its kind in the UK.

He led the publication of the first guide to assess and manage cardiovascular risk in women.

His research on the endothelium led to work investigating the vascular effects of a number of different hormones, to identify the mechanisms of action and effects of these hormones in the cardiovascular system.

In addition to this, he has extensively researched the rare but complex condition known as 'cardiac syndrome X', a condition of troublesome chest pain in the absence of coronary heart disease. He has established a number of new treatment modalities for this difficult-to-manage syndrome.

Professor Collins was a co-investigator on the replacement after standard versus prolonged use (RSVP) trial, a study conducted at the Trust that showed that the radial artery had less furring up five years after surgery when used as a bypass vessel than the conventionally used long saphenous vein. A sub-study led by Professor Collins showed preserved vascular function in radial grafts compared with long saphenous vein grafts.

Currently, Professor Collins is researching a British Heart Foundation-funded study to understand how fine particles in pollution can worsen cardiopulmonary health, and what preventive measures and advice may be taken.

As well as supervising research students, many of whom are now consultant cardiologists, Professor Collins organises an annual cardiovascular update for GPs at the Trust.

Professor Collins has also lectured extensively to national and international medical societies and universities and teaches postgraduate students from around the world.

He is or has been, a member and board member of several renowned societies and committees such as the International Menopause Society and British Menopause Society. He is currently the chairman of the newly formed task force on gender of the European Society of Cardiology.

Consultants share expertise at European Society of Cardiology Congress
A large number of consultants from Royal Brompton and Harefield hospitals attended the European Society of Cardiology Congress in Barcelona, Spain. The event, which took place from Saturday 26 August until Wednesday 30 August 2017, is the…
Crippling chest pain mystery solved
A Yorkshire mother-of-two developed crushing chest pains when she was 42, and the pain remained with her for 14 years.  While Dorothy Asquith was initially rushed to the hospital with a suspected heart attack, test revealed that her…
Contact us