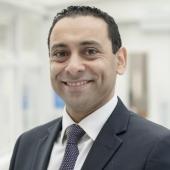 Dr Peter George is a consultant respiratory physician at Royal Brompton Hospital, where he treats both NHS and private patients.

He studied at Imperial College London and received his Bachelor of Medicine and Bachelor of Surgery (MBBS) in 2005.

After that, Dr George trained in respiratory and general medicine at the most prestigious centres in London. He completed his specialist training in interstitial lung disease at Hammersmith and Royal Brompton hospitals in London and at the National Jewish Health Hospital in Denver, Colorado, USA.

In 2009, Dr George was awarded an academic clinical fellowship in respiratory medicine at Imperial College London. With funding from the Medical Research Council, Dr George completed his PhD on the role of the immune system in pulmonary inflammation.

Dr Peter George is experienced in managing all respiratory conditions, with specialist expertise in interstitial lung diseases including:

Dr George is actively involved in research. He recruits patients to clinical trials of emerging and novel treatments for interstitial lung disease.

Dr George has published numerous papers and chapters on his subjects of expertise, including in the journals:

Dr Peter George is an honorary senior lecturer at the National Heart and Lung Institute, Imperial College London. He has an active teaching role where he regularly lectures to undergraduate and postgraduate students. He also supervises and mentors junior doctors at all stages of their training within Royal Brompton Hospital.

On a regular basis, Dr George organises and teaches on educational courses for hospital doctors and GPs on all topics in respiratory medicine. He has also been the course director for a number of international preceptorships on the topic of interstitial lung disease.

Dr George is on the specialist advisory group of the British Thoracic Society for interstitial lung disease.