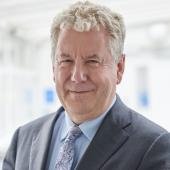 Professor Robert Wilson is a consultant physician in respiratory medicine, who treats private and NHS patients at Royal Brompton and Harefield hospitals.

He qualified in medicine in 1979 from the University of Cambridge and became a consultant at Royal Brompton Hospital in 1989.

He was clinical director of the lung division at both Royal Brompton and Harefield hospitals for many years until 2014. During this time, he implemented many improvements in patient care. These include:

For many years he has been the clinical lead of the host defence unit at Royal Brompton Hospital, treating patients with lung infections.

Professor Robert Wilson is an expert in all types of lung infection. His areas of expertise include:

He sits on the editorial board for the Clinical Pulmonary Medicine journal and co-wrote the Pneumonia Pocketbook.

Professor Robert Wilson is a professor of practice (respiratory medicine) at the National Heart and Lung Institute, Imperial College London.

He has lectured for the British and European Thoracic societies, as well as others. In addition, he has travelled the world on lecture tours, visiting China, Mexico, Egypt, Japan and South Africa amongst others. Several pharmaceutical companies also use Professor Wilson as a consultant.

Seven new professors at RB&HH Specialist Care
Royal Brompton & Harefield Hospitals Specialist Care would like to congratulate seven of our consultants who have been promoted from doctor to professor, by Imperial College London. Our consultants provide the highest standard of care…
Call for lung cancer screening in UK to save lives
Professor recommends lung cancer screening for older smokers. Following the release of US data, Professor John Field from the University of Liverpool suggests that planning should start immediately for a new lung cancer screening service…
Lung cancer to top breast cancer deaths in European women
A study on estimated cancer mortality rates, published in the Annals of Oncology, found that lung cancer deaths in European women is set overtake breast cancer deaths within the next two to three years. Since 2009, lung cancer death rates…
Consultants recognised by Tatler Doctors Guide
Tatler Magazine has recognised a select group of Royal Brompton Hospital consultants as being among Britain’s 250 best doctors. The aim of the Tatler Doctors Guide, according to editor Jessie Hewitson’s introduction, is to “make it simple…
Contact us