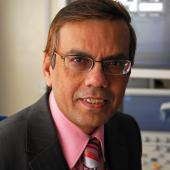 Professor Roxy Senior is a consultant cardiologist at Royal Brompton and Harefield hospitals, where he treats both NHS and private patients.

He received his master's degree in medicine and cardiology from the University of Calcutta, India. In 1989, he joined Northwick Park Hospital, Middlesex, as a research fellow, then was appointed as a consultant cardiologist in 1995, and became director of cardiac research in 2003.

He was appointed as a consultant cardiologist and Director of Echocardiography at Royal Brompton Hospital in September 2010.

In addition, he is professor of clinical cardiology at the National Heart and Lung Institute (NHLI), Imperial College London.

Professor Roxy Senior has pioneered the clinical development of myocardial contrast echocardiography, which is a unique way to assess myocardial perfusion using echocardiography. This helps lead to safe and early detection of established coronary artery disease and myocardial viability.

Professor Senior is widely regarded as a world expert in this field, and has led several large multicentre trials in America and Europe. He pioneered the use of stress echocardiography for early discharge of patients with suspected acute coronary syndrome. He also utilised hand-held echocardiography for detecting cardiac dysfunction, and assessed its cost effectiveness in comparison to brain natriuretic peptide detecting heart failure.

Professor Roxy Senior has published over 200 original articles in peer reviewed journals and contributed to more than 10 textbooks.

Professor Roxy Senior regularly teaches registrars (both inside and outside Royal Brompton and Harefield hospitals), and is a lecturer at many peer medical associations. This includes the:

He has been awarded the Edler Lecture by the University of Lund, Sweden, for his pioneering work in echocardiography.

He is also chairman for the Northwest London Cardiac Imaging group, and is on the editorial board for the European Journal of Echocardiography.