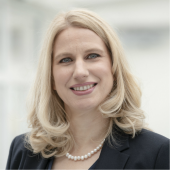 Professor Sabine Ernst is a consultant cardiologist at Royal Brompton and Harefield hospitals, where she treats NHS and private patients.

She qualified in medicine in Germany then continued her training in Los Angeles and Boston, USA, and in Switzerland. She was the director of a magnetic navigation laboratory in Hamburg, Germany.

In 2007, she moved to London, became a specialist in cardiology, and joined Royal Brompton Hospital. She is the research lead in electrophysiology at the Trust and a reader at Imperial College London.

Professor Sabine Ernst is a consultant cardiologist and a cardiac electrophysiologist with specialist expertise in treating:

Professor Ernst is one of the pioneers of using remote magnetic navigation when performing cardiac ablation procedures. She has established this technique from its initiation to it becoming a routine clinical procedure using state-of-the-art equipment, including advanced three-dimensional mapping techniques.

More recently, Professor Ernst's research has focused on novel imaging techniques to visualise the autonomic nervous system. This aims to better understand the nervous system's role in the development and management of cardiac arrhythmias.

Professor Ernst's research has focused on novel imaging techniques to visualise the autonomic nervous system. This aims to better understand the nervous system's role in the development and management of cardiac arrhythmias.

Professor Sabine Ernst has published extensively in the field of cardiac electrophysiology and catheter ablation.

Together with Professor Yen Ho, Professor Sabine Ernst published a book entitled Anatomy for Cardiac Electrophysiologists, which is now also available in Chinese.

Professor Ernst serves on the editorial board of a number of scientific journals, including

Since 2013, she has been associate editor of Heart, an international peer-reviewed journal.

Professor Sabine Ernst is a reader in cardiology at Imperial College London.

She is a highly regarded speaker on innovation and technology at national and international conferences. She lectures on these subjects each year at the European Society of Cardiology’s annual congress.

Professor Ernst also regularly organises courses within the Trust and abroad. She actively collaborates with researchers in US, Canada, Europe, and Asia.

RB&HH to present catheter ablation without the use of X-ray and single port VATS lung resection at Arab Health 2019
Arab Health Based in Dubai,  Arab Health is an annual event that started 44 years ago. Today it is the largest healthcare exhibition and medical congress in the Middle East. In January 2019, the show is set to attract 4,150…
Arrhythmia treatment with zero radiation
Catheter ablation for atrial fibrillation is a well-known corrective procedure. Thanks to new innovative three-dimensional (3D) mapping systems, more cardiac arrhythmia patients can now benefit from zero radiation exposure during…
3D imaging reduces x-ray exposure
More cardiac arrhythmia patients can now benefit from zero radiation exposure during transcatheter procedures, thanks to innovative three dimensional (3D) mapping systems. Arrhythmias or heart rhythm problems are experienced by more than…
Research team celebrates women in science
In preparation for International Women in Science Day on 11 February, the Trust has played host to a seminar celebrating women in science. It was a case of standing room only at the event on Tuesday, which was introduced by Trust Chair,…
Contact us