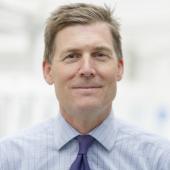 Professor Simon Padley is a consultant radiologist who treats private and NHS patients.

He studied physiology at King's College London, and medicine at Westminster Hospital Medical School (now part of Imperial College London), graduating in 1984. He completed further training in radiology at Addenbrooke's, Papworth, and Westminster hospitals. From 1991-2, he spent time at Vancouver General Hospital, Canada, as part of a thoracic imaging fellowship.

Since 1994, Professor Padley has been a consultant radiologist at Royal Brompton, Harefield and Chelsea & Westminster hospitals. He is also an honorary consultant at Royal Marsden Hospital.

He is a professor of practice in diagnostic and interventional radiology at Imperial College London, in the lung division for the National Heart and Lung Institute.

Professor Simon Padley is cardiac and thoracic radiologist, specialising in thoracic and vascular imaging and intervention, and general body imaging.

He has specialist expertise in:

He has served as a panel member for various organisations and groups:

As well as his peer reviewed output, Professor Padley has delivered more than 60 invited presentations as a faculty member at academic meetings, written multiple review articles, 35 book chapters and has co-authored a book, Cardiovascular Computed Tomography.

Professor Padley teaches and speaks at many national and international meetings.

Rapid treatment for high-risk pulmonary embolism
What is a pulmonary embolism?
Cutting edge research into MRI for cystic fibrosis and PCD
As leaders in the field of cardiac and respiratory care, Royal Brompton and Harefield Hospitals Specialist Care Outpatients and Diagnostics at 77 Wimpole Street are contributing to valuable research into the field of magnetic resonance…
Contact us