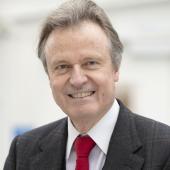 Professor Thomas Lüscher is a consultant cardiologist at Royal Brompton and Harefield hospitals, where he treats private and NHS patients.

He studied medicine at the University of Zurich, Switzerland, and obtained board certification in internal medicine and cardiology. He then trained in cardiovascular research and in echocardiography at the Mayo Clinic in Rochester, MN, USA.

Alongside his role as a consultant cardiologist at Royal Brompton and Harefield hospitals, he is also director of research, education and development.

He has a broad clinical interest in the entire field of cardiovascular medicine from prevention (hypertension, lipid disorders, diabetes) to coronary artery disease (angina pectoris, myocardial infarction) to heart failure.

He is an expert in pharmacotherapy and a trained interventional cardiologist regularly performing cardiac catheterisations and percutaneous coronary procedures (balloon angioplasty and stenting) as well as non-coronary interventions (percutaneous closure of patent foramen ovale, TAVI and renal nerve ablation).

Professor Lüscher has mentored numerous physicians and scientists from from 15 countries.

More recently, inflammation and heart disease - particularly in acute coronary syndromes - has been at the centre of his interest.

The Institute for Scientific Information has rated Professor Lüscher in the top 0.5 per cent of most cited scientists worldwide. He has obtained numerous research prizes and prestigious lectureships worldwide.

Professor Lüscher has published extensively, authoring or co-authoring over 500 original research articles and more than 200 reviews, book chapters and monographs.

He is a member of many editorial boards and from 2004 to 2008 was Associate Editor, Europe, for the journal Circulation.

Since 2009 he has been chairman of the publications committee of the European Society of Cardiology (ESC) and an ex-officio member of the ESC board. He is editor-in-chief of the European Heart Journal, currently the highest rated journal in cardiovascular medicine, and he co-authored The ESC Textbook of Cardiovascular Medicine.