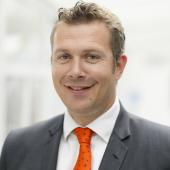 Professor Toby Maher is a consultant respiratory physician at Royal Brompton and Harefield hospitals, where he treats private and NHS patients.

In 2005, Professor Maher was awarded a Wellcome Trust Clinical Research Fellowship. This enabled him to study the molecular mechanisms involved in the development of idiopathic pulmonary fibrosis. He did this research at the centre for respiratory research at University College London and it culminated in the award of a PhD.

His further areas of expertise include:

He also manages pulmonary fibrosis and lung disease associated with systemic conditions such as rheumatoid arthritis, Scleroderma and Wegener’s granulomatosis.

Professor Maher is the lead consultant for clinical trials at the hospitals' interstitial lung disease unit.

In 2017, the British Lung Foundation (BLF) awarded Professor Toby Maher the role of research chair in the area of respiratory research. The role is an academic position, created at the level of professor, which recognises a significant contribution to scholarship and research.

He is an honorary senior research associate at University College London, and he works closely with scientists at the Centre for Inflammation and Tissue Repair, UCL. He has active collaborations with a number of academic partners, including:

As well as publishing original research, expert reviews and book chapters, Professor Maher acts as an expert reviewer for a number of international respiratory journals.

Professor Toby Maher is a professor of interstitial lung disease at the National Heart and Lung Institute, Imperial College London.

He has spoken at international conferences and meetings, such as the American Thoracic Society Meeting in San Francisco and the 17th International Colloquium on Lung and Airway Fibrosis in Modena, Italy.

Research update
As leaders in the field of cardiac and respiratory care, clinicians at Royal Brompton & Harefield Hospitals Specialist Care are contributing to valuable research in a number of areas. Alternative treatment option for sleep apnoea…
Research update
At Royal Brompton and Harefield hospitals, not only do our consultants treat patients, but they are also at the forefront of cutting-edge research into new and improved treatments for heart and lung conditions. Our patients are then…
New drug offers hope to IPF patients
A new drug is now available for patients with idiopathic pulmonary fibrosis, to slow the deterioration in lung function. A big step forward for IPF patients In April 2013, the National Institute for Health and Care Excellence (NICE)…
Contact us