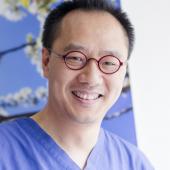 MD FRCP FHRS
Consultant cardiologist and electrophysiologist
Professor Tom Wong is based at the Royal Brompton and Harefield Hospitals where he is the head of the arrhythmia clinical services and the arrhythmia research group.
Book an appointment
Royal Brompton Hospital
privatepatients@rbht.nhs.uk
02031315130
Harefield Hospital
privatepatients@rbht.nhs.uk
02038116911

Professor Tom Wong received his undergraduate degree from the University of Aberdeen. He completed the postgraduate fellowship in Electrophysiology and Pacing at St. Mary’s Hospital, London in 2005. He was then appointed as the consultant cardiologist and electrophysiologist at the Royal Brompton and Harefield Hospitals in 2006 where he is the lead of the arrhythmia clinical services and research programmes of both hospitals since 2014. His career focused on seeking and providing the best care to patients with heart rhythm abnormalities through research and innovation.

He specialised in treating patients with complex heart rhythm abnormalities in advanced disease states and complex cardiac anatomies, including heart rhythm disturbances originating from the atria and the ventricles in congenital, inherited and acquired heart disease.

His research programme relates to his clinical interests to seek a better understanding and treatment of arrhythmias in advanced disease states and complex cardiac anatomies.

He conducted ARC-HF clinical trial (NCT00878384), the first to show the beneficial effects of catheter ablation in cardiopulmonary performance compared to drug therapy in patients with persistent atrial fibrillation and heart failure. He published the cost impact of the left atrial appendage closure in stroke prevention based upon the UK cost model to inform the economic benefit, beyond the clinical needs, of this treatment to patients at risk of stroke. He completed NIHR funded, CASA-AF trial (NCT02755688), which is the first to show that catheter-based ablation to treat longstanding persistent atrial fibrillation is as effective as a surgical approach. In addition, his research group continues to investigate novel mapping, ablation, and device-related technologies with an aim to improve clinical outcomes.

He received the People of the Year Award from the Association for Disability and Rehabilitation in 1995, a Master’s Letter of Commendation from the Guild of Air Pilots and Air Navigators in 1996, and the Young Investigator Award from Heart Rhythm UK in 2005.

Professor Wong has published more than 100 original research papers in peer-reviewed journals. For a complete list of publications please click (https://orcid.org/0000-0002-6484-4961). A selected few papers as below:

Consultants share expertise at European Society of Cardiology Congress
A large number of consultants from Royal Brompton and Harefield hospitals attended the European Society of Cardiology Congress in Barcelona, Spain. The event, which took place from Saturday 26 August until Wednesday 30 August 2017, is the…
The new leadless pacemakers
A patient at Royal Brompton Hospital as one of the first in the UK to be fitted with an innovative new pacemaker that works without leads.  Bill Hill, 78 from Buckinghamshire, was implanted with a Nanostim™ pacemaker to treat slow heart…
A map to the heart: new 'Rhythmia' mapping technology for treating arrhythmia
Consultants at Royal Brompton and Harefield hospitals are using a new, groundbreaking technology to map the electrical signals of the heart. Heart rhythm problems (known as arrhythmias) occur when the electrical impulses that control your…
Preventing stroke in arrhythmia patients using LAA occlusion
Atrial fibrillation is not only the most common form of cardiac arrhythmia - affecting approximately two per cent of the general population - but it also represents a leading cause of stroke. Blood clots can form in the left atrial…
Contact us