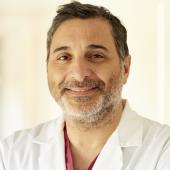 Mr Toufan Bahrami is a consultant cardiac surgeon at Harefield Hospital who treats both private and NHS patients.

He trained and qualified at Pitié-Salpêtrière University Hospital in Paris, France.

In France and in the UK, he trained and worked with three pioneers in cardiac surgery: Professor Alain Carpentier (who pioneered the technique of mitral valve repair surgery as well as artificial (biological) valves), Professor Sir Magdi Yacoub (who pioneered aortic valve surgery, homograft, stentless valve, and heart and lung transplantation) and Professor Alain Cabrol (who did the first heart transplantation in Europe).

He has been at Harefield Hospital since 2001. He leads the minimally invasive and endoscopic cardiac surgery service, including mitral valve repair surgery.

Alongside this, he is an honorary consultant at four other NHS hospitals:

Mr Toufan Bahrami is nationally and internationally recognised in minimally invasive, endoscopic (keyhole) cardiac surgery including mitral valve repair and aortic valve replacement. He has completed between 3,000 and 4,000 surgical procedures on the heart.

Mr Bahrami gives all his patients a personalised approach to care. His multidisciplinary team evaluates every patient to first determine whether they need surgery and then appropriate guideline therapy and timing of intervention will be applied.

Mr Bahrami is at the forefront of developments in endoscopic minimally invasive heart surgery. Instead of conventional surgery, heart valves are replaced or repaired by gaining access to the heart through a small incision between the ribs. For this, he uses a thoracoscope to view the chest cavity and to guide his movements.

In addition, Mr Bahrami performs coronary artery bypass grafts (CABG) through a mini-incision on the side of the chest while the heart is beating (called off-pump CABG) rather than using a heart bypass machine.

These procedures offer the benefits of conventional open-heart surgery but with less traumatic injury (a smaller incision), a shorter stay in hospital, a smaller and more aesthetic scar, and a much quicker recovery time.

Mr Bahrami has been the forerunner in utilising innovative surgical techniques, including:

Mr Toufan Bahrami has published research papers on valve repair (mitral and tricuspid) and transplantation in peer-reviewed journals including the European Journal for Cardio-Thoracic Surgery, the Annals of Thoracic Surgery and the Journal of Thoracic and Cardiovascular Surgery.