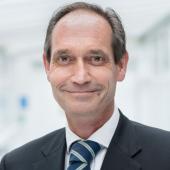 Mr Ulrich Rosendahl is a consultant cardiac surgeon based at Royal Brompton Hospital, who treats private and NHS patients.

He studied medicine at the University of Münster, Germany. In 1988, he started his training in heart surgery at Texas Heart Institute, USA, under Dr Denton Cooley, who was famous for performing the first implantation of a total artificial heart. He then trained in general and vascular surgery at the University of the Witwatersrand, Johannesburg, South Africa.

In 2012, he was appointed as a consultant cardiac surgeon at Royal Brompton Hospital, London.

During his 30-year career in heart surgery, Mr Rosendahl has performed over 5,000 open heart operations. Moreover, he has supervised and observed the clinical course of many more thousands of patients who underwent heart operations.

He has published more than 100 research findings.

Our team completes UK-first heart procedure
Our cardiology team has performed a pioneering minimally invasive procedure to treat disease of the heart’s largest arteries, avoiding the need for open-heart surgery.
Our team completes UK-first procedure to treat aortic aneurysm
Sutureless aortic valve replacement
A new aortic valve replacement, that doesn’t require sewing into place, is reducing surgery times and proving to be an innovative alternative to conventional options for treating aortic valve stenosis. Stenosis due to calcification is the…
New vascular service launched at Royal Brompton Hospital
Royal Brompton and Harefield Hospitals have recently launched a new integrated service for patients with cardiovascular disease. The service enables patients to be treated for circulation problems, both in the heart and the peripheral…
Contact us