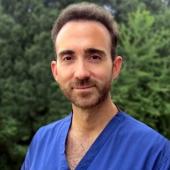 Dr Vasileios Panoulas is a consultant interventional cardiologist at Royal Brompton and Harefield hospitals, where he treats private and NHS patients.

From 2008-10, he underwent his core medical training at Guys and St Thomas’ Hospital. This was followed by his cardiology core training at Hammersmith Hospital where he was appointed as a National Heart and Lung Institute academic clinical fellow (2010-13).

Subsequently, he returned to London and was a North West London interventional fellow for two years at Hammersmith Hospital (2014-16). At this time, Dr Panoulas was a NIHR clinical lecturer in cardiology at the National Heart and Lung Institute, Imperial College London. He continues his academic work there now as an honorary senior clinical lecturer.

Dr Vasileios Panoulas has clinical expertise that encompasses both general and interventional cardiology.

He has a special interest in:

His clinical expertise is supported by professional qualifications, including:

Dr Panoulas is also a proctor for TAVI and the Impella device.

Consultants new to RB&HH
Royal Brompton and Harefield hospitals is a leading centre for the care and treatment of heart and lung conditions. We attract the most talented experts to provide the highest standards of patient care. These consultants have recently…
Contact us