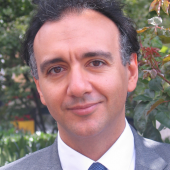 He studied at Imperial College London, qualifying in 1992 with distinction in all subjects. He was awarded the University of London Gold Medal.

He continued his training in a number of teaching centres in London, including St Mary’s, St Thomas’ and Hammersmith hospitals.

Dr Markides was appointed as director of the heart division at Royal Brompton Hospital in October 2014.

Dr Vias Markides specialises in the management of all arrhythmias, but especially the ablation of complex arrhythmias including atrial fibrillation and ventricular tachycardia. He is also experienced in the implantation of pacemakers, ICDs and devices for cardiac resynchronization.

Dr Markides has been a writing member for the National Service Framework for CHD (Chapter 8: Arrhythmias). For a number of years was the clinical lead for arrhythmias/devices for the Northwest London Cardiovascular and Stroke Network, before taking overall leadership for cardiovascular services for the same network. He has played an important role in the shaping and delivery of a novel model of care for arrhythmias in London.