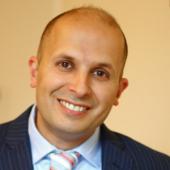 Mr Veer studied at University College London and then continued his surgical training at Barts and The London.

He continued his advanced ENT training in Newcastle, followed by placements at Evelina London Children's Hospital (part of Guy's and St Thomas' NHS Foundation Trust) and in France, Italy and Australia.

After this, he took up a post in London at the Royal National Throat, Nose and Ear Hospital, and works in the award-winning sleep surgery department there. He is the co-founder of the British Association of Sleep Surgeons.

Mr Vik Veer has a clinical interest in the following:

Mr Vik Veer's is at the forefront of new technologies for sleep disorders such as snoring and obstructive sleep apnoea (OSA). He is currently developing a national research database for the newly formed field of sleep surgery.

He is working with researchers to be one of the first surgeons in the country to implant a bilateral hypoglossal nerve stimulator for severe OSA.

Mr Vik Veer is the programme director for the school of surgery at Barking, Havering and Redbridge Trust hospitals. The school aims to provide high-quality training for junior doctors so that hospitals can become safer and more efficient, and provide another route for more doctors to become consultants and GPs.

He is also the founder and director of Prepared for ENT, a registered charity established in 2010 that provides educational courses for ENT doctors.