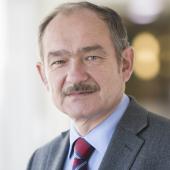 He received his thoracic surgical oncology training at PA Hertzen Cancer Research Institute in Moscow in the early 1980s. During his training, he championed a thesis entitled 'Multiple Primary Tumours of the Lung' and subsequently published a book on the subject.

Professor Anikin first worked as a thoracic and general surgeon in the north of Russia. He was appointed as a senior researcher at the Medical Radiological Research Institute of the Russian Academy of Medical Sciences, where his main clinical focus was oesophageal surgery.

After moving to the UK in the early 1990s, Professor Anikin worked at the Royal Victoria Hospital in Belfast, Northern Ireland. In 2000, he was appointed as a consultant at the Bradford Royal Infirmary, and then he also worked at the Leeds General Infirmary in Yorkshire.

Since 2007, Professor Anikin has been a consultant thoracic surgeon at Harefield Hospital.

Professor Vladimir Anikin has significant experience in surgery for:

One of his clinical and scientific interests is using cryosurgery to treat endobronchial tumours. This pioneering method significantly improves quality of life and prolongs survival in patients with advanced lung cancer. This technology also allows healthcare professionals to avoid major surgery in patients with other forms of endobronchial tumours.

Professor Anikin also has a clinical interest in treating patients with complex thoracic surgical problems or with complications from previous surgery. This includes reconstructive chest wall surgery after previous interventions for congenital and cardiac pathology. He has a unique approach to treat patients with unstable sternum after cardiac surgery.

He uses 3D video-assisted surgery which enables him to offer minimally invasive surgery to patients with more complex problems. He also introduced PlasmaJet technology into his practice. This technology helps to expand the options of treatment offered to patients with pleural pathology, including malignant mesothelioma, and to a large group of patients with metastatic tumours in their lungs.

Professor Vladimir Anikin has been widely published in peer-reviewed journals, such as:

He has also presented internationally on numerous occasions on the subject of surgical outcomes and techniques in various areas of thoracic surgery and pulmonary cryosurgery.

Minimally invasive single port resection – successful patient outcomes
Keyhole surgical treatments for complex lung cancers provide a much faster recovery compared to the conventional thoracotomy surgical approach. At Royal Brompton & Harefield Hospitals Specialist Care, patients can now benefit from…
Single port VATS lobectomy – an alternative surgical approach
More than 46,000 people are diagnosed with lung cancer in the UK every year, making it the third most common type of cancer. Our experts continue to push the boundaries, developing less invasive treatments to successfully treat complex…
Lung cancer surgery using groundbreaking VATS PlasmaJet® system
At Harefield Hospital, patients with pleural pathology and those with metastatic tumours in the lung can be treated using less invasive and more effective surgical approaches in the form of video-assisted and open procedures using the new…
VATS lobectomy or traditional lung cancer surgery?
Lung cancer is the third most common cancer in the UK and accounts for approximately 13 per cent of all cancers. It also has the highest mortality rate in the UK for both males and females. But with two different surgical approaches…
Contact us